It’s that time of the year when spirits are high despite the cold of winter. But more practically, it’s that time of year when retailers are scrambling to amass the majority of the year’s revenues. This year, retailers went for Cyber Week instead of just Cyber Monday and pre-pre-Black Friday events. But this strategy of trying to one-up each other resulted to shoppers spending less during Thanksgiving and Black Friday. Sales at brick-and-mortar stores within the 2-day period reached $12.29B which is a 0.5% decreased compared to last year. Online spending is on the rise though. According to a report from Adobe that tracked online spend from November 1st to November 28, $32B was spent online – 14% more than in 2013. See my post here regarding mobile spend with special focus on iOS and Android use.

With all the shopping being done, I keep thinking of the scale of the logistics involved. Ahead of Cyber Monday, Amazon released a video detailing a part of those logistics. Meet the Kiva robots from Kiva Systems, a company that Amazon acquired in 2012 for $775M.

But if you prefer the fantastical reason for how those Christmas gifts arrive, you can track Santa via Google.

Here are this week’s most relevant new in tech and retail:

IBM and Adobe recently released some numbers for Black Friday and Cyber Monday online sales in the US. Here are some highlights from the IBM report and Adobe report:

With the historic numbers related to the use of mobile devices, there is a lot of focus on iOS vs. Android shoppers. Simply put, iOS users use their mobile devices more for online shopping and more importantly, buy more than Android users – in this case, four times more. This comparison is not new. Historically, iOS users spend more on apps than Android users. With these recent numbers, there’s again a lot of talk on how these affects future app development. Developers will almost always develop for iOS first and may even forego developing for Android.

As an Android user, it irks me to have to hold on to my iPad because some apps are simply not available on Android but I understand why. It further irked me when I saw this quote from Jay Henderson, director of IBM Smarter Commerce:

iPhone and iPad buyers tend to be slightly more affluent and more comfortable with technology.

Affluent, I can agree but more comfortable? The iOS’ value proposition is its simplicity – don’t offer too many choices on how something is done and the user will just get it. This is why, even your most un-tech savvy friend or family member has an iPhone/iPad. Go to an Android and the learning curve is a little steeper (but once you’re there, you can do so much more productive things on an Android). But I digress, this post is not about pitting iOS and Android users’ tech-savviness. This post is to poke some holes on those mobile spend numbers because as an Android and iOS user who happens to *love* shopping, I have experienced firsthand as to why I browse/buy less on my Android.

Why I browse and buy less on my Android vs. iOS

Incidentally, browsing the sale section at Barney’s mobile site is limited to filtering between “Men”, “Women”, “Home”, “Kids”, etc. There are no filters for size and sub-categories so results number to 12,000 items which can test the patience of even the most avid shopper.

Based on sites that I use, here’s a sample of shopping apps for iOS and Android: 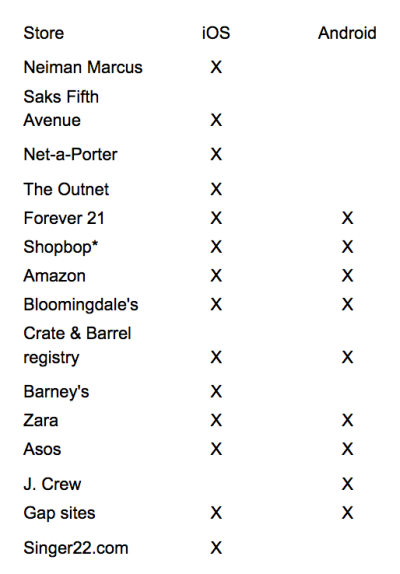 Google’s ambitions for Android are not focused on the users’ immediate dollar value
As more and more metrics pit the dollar value of Android users vs. iOS users, it will only perpetrate the cycle: developers will focus less on making the Android experience more robust; Android users spend less money; iOS users are more valuable – and so on. In this case, I sometimes get frustrated with Google for not marketing the Android platform better to developers. I understand that they have ambitions beyond users spending money within their devices but at some point, will Apple’s easy/seamless ecosystem trump Android adoption globally? But then again, Google’s currency, to put simply, is information and large amounts of it. Even if Android dominance falters in North America, there’s billions in the rest of the world who will not be able to afford iOS devices (especially if Apple continues to act like a Veblen good*) and will most certainly adopt the Android platform. And that’s several billions of users using a platform that Google controls. Scared yet?